It was on a surfing trip to Portugal, nearly 20 years ago, that childhood friends Stefan Clauss and Stefan Schulze Dieckhoff became fed up with tent poles. Fusing together these spindly connectors each night seemed unnecessarily fiddly – ​​to say nothing of the indignity of doing it while buffeted by wind and rain. The German duo set out to create a tent that could be erected with “the ease of pushing a button”, says Clauss. Or, as they call it: “The tent of the future.”

Inspiration struck one night in 2009 while Clauss was watching a documentary about the Eden Project, the pioneering development in Cornwall featuring gardens housed inside inflatable domes. What if – he wondered – they made tents mimicking these famously sturdy forms? After consultations with Germany’s Fraunhofer Institute and other specialists, Heimplanet was born – and the two Stefans did the seemingly impossible: they made tents sexy. Their UFO-like creations were also stupidly strong, able to withstand wind speeds beyond 130km/h (their Mavericks group tent can withstand 180km/h winds). True to their initial brief, the whole thing can be blown up with the ease of a pool toy. A small- to regular-sized tent takes one person between 15 and 50 seconds using a pump. “You unroll it, you inflate it: welcome home,” Clauss says.

Heimplanet’s showstoppers fit neatly alongside other innovative camping products on the market. Over the past decade, “there has been a reimagining of what camping can be,” says Robert Brigham, managing director of Ellis Brigham Mountain Sports and founder of Outsiders Store. All the comforts of home can be spirited to the forests of Yosemite or the dunes of Abersoch, Wales. There are Helinox extendable benches with bright blue aluminum legs; ribbed, inflated sleeping mats from Thermarest; and the cocoon-like Rab Neutrino 600 sleeping bag, which is made from recycled nylon and weighs less than 1kg. Not to mention handsome, sturdy Yeti coolers that will “keep the ice for your gin and tonic cold for the entirety of your trip,” Brigham says.

Simultaneously, the gorpcore fashion trend (“gorp”, derived from “Good Ol’ Raisins and Peanuts”, is the slang for trail mix) has found city slickers wearing Hoka hiking boots and technical parkas even if their biggest daily climb might only be to a rooftop bar. A new wave of design-savvy outdoor specialists – including Japan’s Snow Peak, Goldwin and And Wander – have made camping appeal to a broad group of urbanites, says Brigham, meaning it is no longer simply the preserve of Bear Grylls types or families in campervans .

And camping has rarely been so popular. Nearly 48mn Americans went camping in 2020 – a record high, according to Statista – while some UK campsite bookings were up by 500 per cent in summer 2021. Andrea Westerlind, whose shops in Manhattan, New York State and Massachusetts sell dangerously attractive mountain-ready gear, saw revenues quadruple in the past two years. Similarly, Snow Peak’s revenues have climbed by 180 per cent globally since 2019, with many thirtysomething clients investing in tents, tarps and other equipment that suggested they were actually planning to spend a night under the stars.

Lisa Yamai, the 34-year-old president of Snow Peak, has become a sage for the new generation of cool campers since taking over her family’s business in early 2020. She studied design at Tokyo’s acclaimed Bunka Fashion College and has been instrumental in expanding Snow Peak’s apparel offerings, which include pillowy, down-filled cardigans and flattering fleece trousers. Yet her company’s prized product is something humbler: the tabiki, a folding, stainless-steel fireplace that will flicker at the center of a campsite without leaving any burn marks (depending on the model, it’s also a firepit and grill). When Yamai goes camping – Sado Island in the Sea of ​​Japan, with its steep peaks and sweeping coastline, is her favorite spot – she’s mostly going for the fireside heart-to-hearts. “When you’re sitting around a fire, there’s stuff you end up talking about that you maybe wouldn’t have shared otherwise,” she says. “You throw away all the roles you usually assume.”

An industry trailblazer since the 1990s, Snow Peak is launching stove products this spring that use bioethanol fuel rather than gas canisters, so they “leave less of a footprint while still having that primal flame”, says Yamai. Eco-friendly innovations are a focus for other brands too. Japan’s Goldwin will soon be releasing a line of outerwear, Goldwin 0, partly made from a biopolymer created via a plant-based fermentation process. “It’s a fabric that’s grown in a factory,” says general manager Takuya Kinami, but it’s not synthetic and is free of petrochemicals and animal products. And Topo Designs, a Colorado brand known for its hardy backpacks, is about to launch its Mountain Series collection of colourful, retro-looking carriers made from 100 per cent recycled nylon. Although historically it has been a challenge to make hard-wearing products from sustainable textiles, technological improvements in the past two years mean that recycled fabrics are now “just as durable as the non-recycled stuff”, says Topo Designs co-founder Jedd Rose .

Which is just as well, because these products need to perform. Long before Yeti’s V Series stainless-steel cooler was being featured on Kim Kardashian’s Instagram, it was the brand of choice for fishermen in Texas and Florida because it “delivered a level of durability and performance that the market hadn’t seen”, says CEO Matt Reintjes. The Texan brand, which has expanded into soft-backed coolers and water bottles, all ruggedly appealing, is reaping the benefits: in 2021, net sales totaled $1.41bn. Heimplanet’s tents, meanwhile, are sold to Norwegian cruise ships to take on expeditions to the Arctic and Antarctica – and to Icelandic tour guides. Given that Iceland is known as “the graveyard for tents” due to its extreme mercurial conditions, says Clauss, that might be the ultimate tick of approval.

There’s now gear to accommodate all camping styles. In Japan, Snow Peak is noticing a boom in solo travelers (“solo camping” was one of the biggest trending phrases on Japanese social media in 2021, says Yamai) who seek out micro stoves and one-person chairs and tables. And lots of Westerlind’s American customers are disappearing “for a month to Yellowstone or New Mexico and working their jobs from there”, armed with packable throws, duvets and pillows from French brand Pyrenex. In the UK, where the inclination is to carry everything on the back, or bike, says Brigham, ultra-lightweight innovations including Big Agnes tents and Aeropress GO coffee makers are flying off shelves. 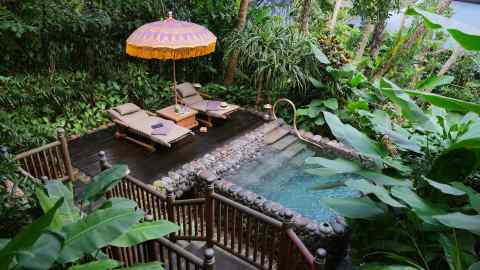 Whatever camping style you choose, you’ll always be able to enjoy Clauss’s favorite thing about camping: waking up knowing that “you have just two things to take care of during the day: breakfast and dinner”. Last year he drove 5,000km across Europe by motorbike, sleeping beside lakes wherever possible. He would wake himself up with a dip before brewing coffee and cooking scrambled eggs. “Nowadays our lives are so complicated, so digital, so ‘all over the place’, that if you can just enjoy being, that’s a huge thing,” he says. In the great outdoors, he adds, “life is simple and all is good”.