SINGAPORE — Bearing stars and crests on shoulders, high-ranking military personnel decked in a spectrum of colors — green, gray, brown and white — paced hurriedly across the hallways of the sprawling Shangri-La Hotel in Singapore on Saturday, skillfully navigating cordons and checks by security personnel.

The last time the Shangri-La Dialogue took place in person in 2019, the Quad leaders had never held a summit, and frameworks such as AUKUS — the new US, UK and Australia grouping — and the Indo-Pacific Economic Framework — US President Joe Biden’s attempt to deepen economic engagement in the region — did not exist.

Hosted by the UK’s International Institute for Strategic Studies, the dialogue has traditionally been a forum to discuss regional security issues in the Asia Pacific — and an annual platform for US and China to project their views.

But the event took a new turn this year after the Russian invasion of Ukraine. The single biggest topic on participants’ minds, whether they were from the East or the West, was just how the Ukraine war will impact the Indo-Pacific region. Perhaps the sense of urgency was the reason for all the fast walking.

On Saturday, over 570 delegates including top defense officials attended the highlight of the three-day summit: a virtual appearance by Ukrainian President Volodymyr Zelenskyy. From the capital Kyiv, the leader warned of the spillover effects of the invasion to other regions.

“We must break the ability of Russia, and any other country in the world, to block seas and destroy the freedom of navigation,” Zelenskyy said in the special address.

He explained that Russia’s control of the Black and Azov seas has blocked the ability of Ukraine, dubbed “the breadbasket of Europe,”‘ to export wheat supplies, and thus contributed to a global food shortage.

Russia must know that its “belligerent policies will have consequences for itself,” Zelenskyy said.

“If there are no such consequences … and we are unable to export our foodstuffs … the world will face an acute and severe food crisis and famine in many countries of Asia and Africa.” He added that the war is “not only about Europe,” but affecting everyone, “globally.”

Zelenskyy’s dire comments likely won the sympathy of most participants. But when it comes to Russia’s invasion itself, countries in the Indo-Pacific have been divided in their responses. US allies such as Japan were quick to support various sanctions. Voices from Southeast Asian countries, however, have been a mixed bag.

Singapore imposed its own economic sanctions on Russia, the only country among the 10-member Association of Southeast Asian Nations to go in tandem with the West. Indonesia, Brunei and the Philippines have condemned the attack on Ukraine without naming Russia as the aggressor. Vietnam opposed an April United Nations motion to boot Russia from the Human Rights Council. On Saturday, many regional defense chiefs touched on the Ukraine war but some treaded carefully. Indonesia’s Defense Minister Prabowo Subianto said the “situation in Ukraine” has shown the Southeast Asia country cannot take its “security and independence for granted” — without mentioning Russia by name.

For the US and China, the two heavyweights at the dialogue, the focus was Taiwan. US Secretary of Defense Lloyd Austin said in his speech Saturday morning that the US policy on Taiwan has not changed. “Unfortunately, that doesn’t seem to be true for the PRC,” he said, referring to the People’s Republic of China. Austin pointed to Chinese aircraft flying near Taiwan in record numbers.

China, for its part, attended with a huge delegation. The Global Times, the hawkish tabloid under the auspices of the Chinese Communist Party’s flagship newspaper the People’s Daily, noted that the participation in the dialogue reflected China’s confidence.

“China’s choice to send its top defense official this year at this sensitive time shows China’s confidence and strategic focus, as well as China’s strategic sincerity of pushing the Asia-Pacific to integration and cooperation standing at the crossroads,” the paper quoted Yang Xiyu, a senior research fellow at the China Institute of International Studies, as saying.

The paper also noted that China’s message to the dialogue was that there are several “red lines” that the US should not cross. “It is important to note that the risks in the Asia-Pacific region have reached a point where they must be managed. But this can never be achieved by forcing China to give up its core interests,” such as Taiwan, it said in an editorial Saturday. 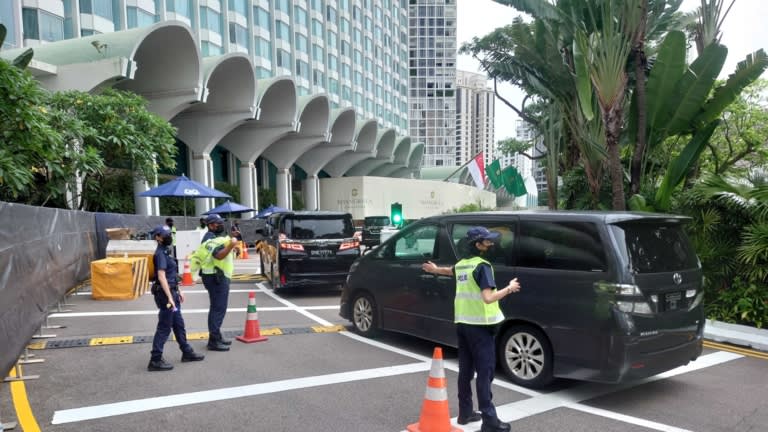 Security was tight at the Shangri-La Hotel in Singapore on June 11. (Photo by Dylan Loh)

Security was tight at the gathering, the first in person meeting after a two-year hiatus due to COVID-19. Outside the hotel, steel barricades that could be raised or lowered to manage vehicles were set up.

The hotel is a 10-minute walk up a hill from the Orchard Road, which is a popular shopping street for tourists. It was also the venue for the meeting between Chinese President Xi Jinping and Taiwan’s President Ma Ying-jeou in 2015.

Analysts and defense officials actively exchanged views over breakfast and lunch at the hotel restaurant just outside the main hall. Topics included whether Xi would order an invasion of Taiwan, what China’s takeaways from the Ukraine war were, and just how deep China-Russia relations are.

On Sunday, the closing day of the dialogue, Chinese Defense Minister Wei Fenghe will deliver an address. In his meeting with Austin on Friday, Wei said “if anyone dares to split Taiwan from China, the Chinese military will not hesitate to fight, and will resolutely crush any ‘Taiwan independence’ attempts to firmly safeguard national sovereignty and territorial integrity at any cost ,” according to the Global Times.

All eyes will be on whether he uses similar vocabulary in his public speech.