Piezoelectric materials are applicable in the biomedical field, and if they can be biocompatible and degradable, it will be a big step towards real applications. Recently, a research team at City University of Hong Kong (CityU) developed a simple exfoliation method to prepare ultrathin films of small intestine tissues from sheep. This biological tissue has been considered to have no piezoelectric properties at the macroscale, but the CityU research team discovered that if the material is ultrathin, it can show piezoelectricity. With its natural biocompatibility, the team believes that such piezoelectric biomaterial can likely be used in various biomedical applications, such as sensors and smart chips.

Potential application of piezoelectric biomaterials in the biomedical field

The 2021 Nobel Prize in Physiology or Medicine was awarded to scientists David Julius and Ardem Patapoutian, who solved the mystery of the human sensation of touch and pain. They verified that cells sense pressure and elicit the sensation of touch through the electromechanical coupling effects of the proteins Piezo 1 and Piezo 2. In fact, the piezoelectric effect is a type of electromechanical coupling effect, which widely exists in piezoelectric biological tissues, such as bones, wool, tendons and the epidermis. 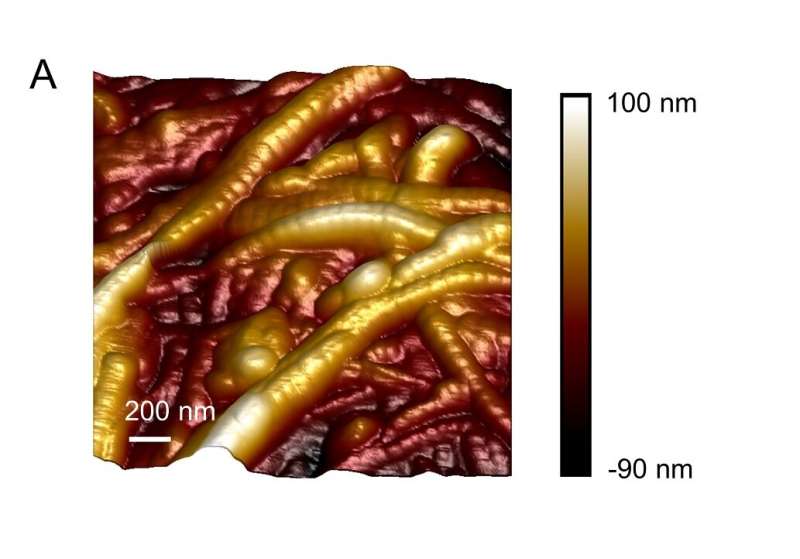 “In the 1960s, renowned Japanese scientist Eiichi Fukada observed a direct but weak piezoelectric effect in intestines at the macroscopic level,” said Dr. Yang. “However, owing to the technological limitations of measurement equipment at the time, quantitative determination of the intrinsic piezoelectric effect could not be demonstrated. So the reason for its biological piezoelectricity remained a mystery.”

Key to the generation of the piezoelectric effect 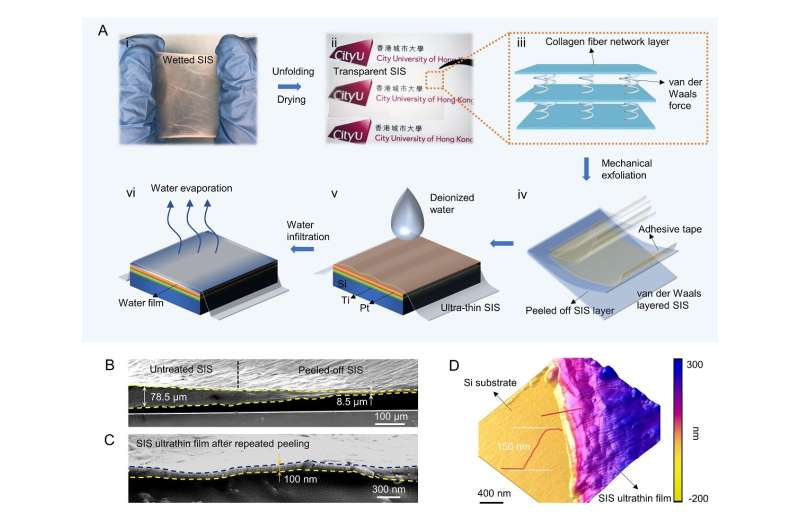 One of the breakthroughs achieved by the team in this research is the proposed van der Waals exfoliation technique, a simple method of fabricating biopiezoelectric ultrathin film. Inspired by the processing method of two-dimensional materials such as graphene, the team made use of the weak van der Waals force between layers to fabricate single or multi-layer ultrathin film of small intestine submucosa. The ultrathin film produced by this repeated peeling method can reach a thickness of 100nm, which is nearly 800 times thinner than that of the non-exfoliated original material. 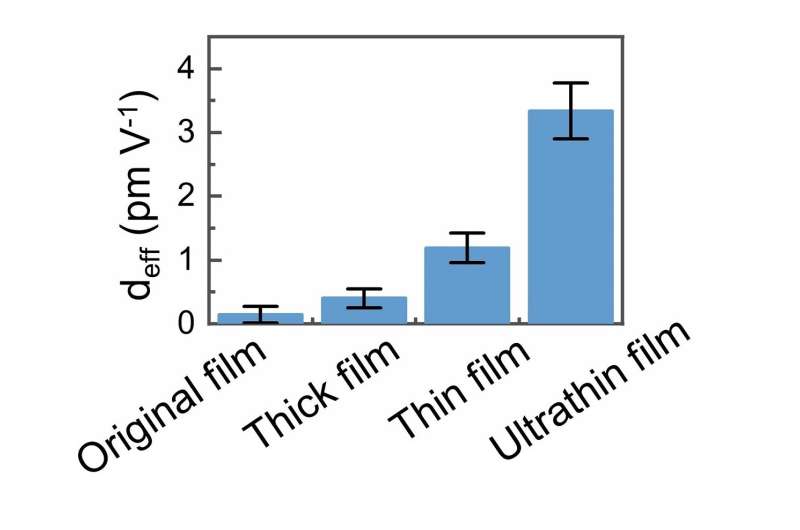 Small intestine submucosa exhibits an increase in the effective piezoelectric coefficient with a decrease in film thickness up to a saturated level of about 3.3 pm/V. Credit: Advanced Materials (2022). DOI: 10.1002/adma.202200864

The research team also designed a biosensor to verify the practical application of piezoelectricity in the small intestinal submucosa ultrathin film. The team found that its natural biocompatibility, flexibility and piezoelectricity make it a promising and ecologically friendly material for electromechanical microdevices in implantable and wearable electronics. The vdWE technique that the team proposed is facile and environmentally friendly, and also can be applied to various biological soft tissue materials with van der Waals layered structures, such as fish bladders and cow Achilles tendons.

A possible paradigm shift within piezoelectricity

This document is subject to copyright. Apart from any fair dealing for the purpose of private study or research, no part may be reproduced without the written permission. The content is provided for information purposes only.