Minister of Health and Welfare Chen Shih-chung’s (陳時中) move to quit smoking has led to more than three to four times the normal number of participants — or about 500 to 600 people — enrolling in a quitting event organized by the John Tung Foundation, the group said yesterday.

Chen enrolled in the event in March and throughout the process has refused to use medication, the foundation said.

Having been a smoker for more than 50 years, Chen’s insistence on not relying on medication is impressive and commendable, foundation smoke hazard prevention center director Lin Ching-li (林清麗) said. 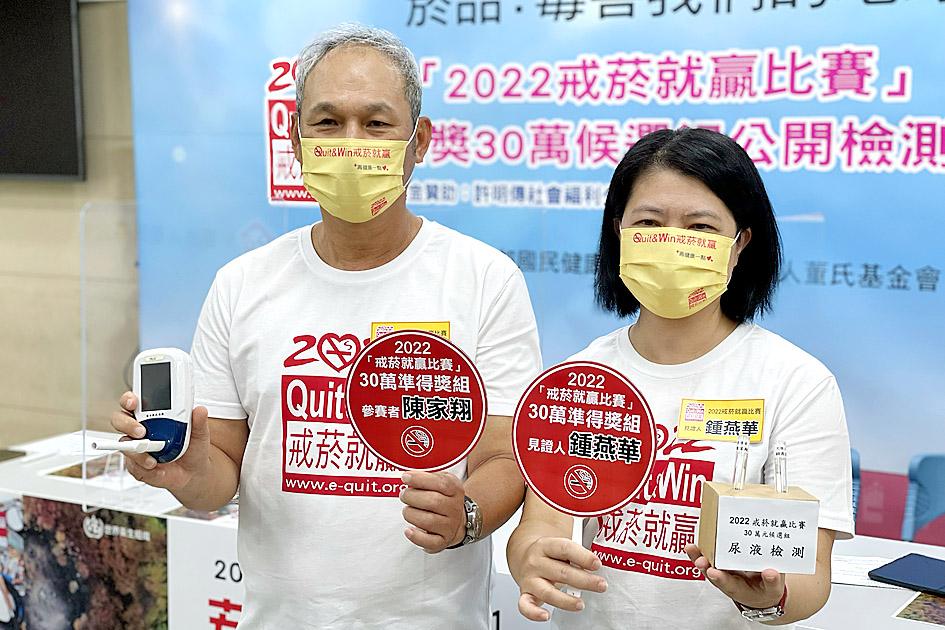 Asked if Chen had succeeded, Lin cited a study in California which said that people typically go through 15 to 16 attempts before succeeding.

It is extremely difficult for a person working in a high-stress job choosing to forgo medication to quit smoking, Lin said.

However, many of the participants in this year’s event cited Chen’s participation as the reason they joined the program, she said.

The winner of this year’s prize, 60-year-old Chen Chia-hsiang (陳家翔), said he started smoking when he was 14, quit once when he was 25 due to a punctured lung, and started again in his 40s because of work .

Chen’s wife, Chung Yen-hua (鍾燕華), said she was glad that Chen participated and lasted an entire month without smoking, adding that the family has become closer and happier as a result.

Only 10 percent of people are able to quit smoking on pure will alone, Chan said, adding that with medication, that number increases to 35 to 40 percent.

The government offers smokers who want to stop subsidies for two quitting and counseling therapy sessions per year, with each session lasting eight weeks, Chan said.

Since May 15, certain medications’ fees have also been waived to help promote the policy, Chan said.

Asked at yesterday’s Central Epidemic Command Center news conference whether he has been able to quit smoking, Chen said that he considered it a success on his part, but that his secretary thought otherwise.

Comments will be moderated. Keep comments relevant to the article. Remarks containing abusive and obscene language, personal attacks of any kind or promotion will be removed and the user banned. Final decision will be at the discretion of the Taipei Times.