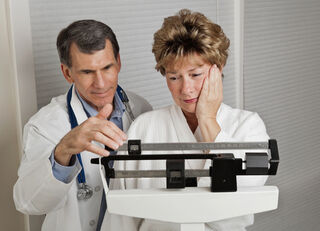 A recent study on an association between weight and health, published in the JAMA and discussed in top media outlets, reminded me once again that focusing on the number on the scale as the only variable associated with health issues continues to fuel weight stigma, particularly in the medical profession. I’ve personally experienced this with physicians who continue to encourage me to try various fad diets, who negate or minimize how much and what type of exercise I engage in or the “healthfulness of my diet” (because they are not seeing changes in the number on the scale). and who blame all of my medical issues on one thing: weight.

Patients of size have been stigmatized and body shamed by doctors and other health care providers who are the second-biggest culprits of weight stigma, second only to our own families.

What doctors and researchers don’t tell you

The difference between individuals in larger bodies and others goes way beyond the number on the scale. Some other factors rarely considered by researchers include socio-economic status, living in food deserts, weight stigma, health inequities/lack of insurance, race-based stress, and trauma. Adverse Childhood Experiences (ACE) studies show a definite association between childhood adversity and larger size in adulthood. Few studies take into account the other differences between those living in larger bodies and those who are not.

One reason this message is so hard to counter is that the media keeps it at the top of their health headlines: Any article with this message gets widespread coverage. Also, many researchers who write articles with this message have direct connections with, or receive grants or other remuneration from, companies in the business of weight loss. Researchers who don’t further this message may be less likely to receive such financial support.

While American media and scientists continue the advance the tyranny of the scale, in the United Kingdom some scientists and the National Health Service have proposed changes. While these changes do not go far enough, it is encouraging that, as one article states, while “PwO (those living in larger bodies) may welcome weight-related conversations with a healthcare provider, they evoke complex feelings, demonstrating the need for sensitivity and respect in these conversations.” (Hughes et al. 2021). The NHS directive also focuses on providing policies that are supportive, such as requiring large restaurants, cafes, etc. to add calorie labels to foods they serve and legislation to limit the advertising of highly processed foods. While these directives don’t go far enough, they represent a shift from putting all the onus on individuals living in larger bodies to offering more support and at least some sensitivity. What is still missing is the acceptance that size should not be considered problematic, nor should the focus on care be directed solely toward weight loss.

What is also missing from these changes is recognition and promotion of studies showing that you can be healthy no matter your size, which, therefore, means that the systemic machine focused on promoting weight loss, even with respect and sensitivity, should instead be driven by supporting individuals who want this support to do the things they can do, without body shaming and stigma. This would include making it easier for people to be active if they so choose, having access to affordable food in areas of food deserts and swamps, reducing exposure to weight shaming and bullying in schools and in public, and reducing discrimination and race-based trauma .

Not everyone can or will be thin. The issue of size (if it even is one) is complex and the research on the association between size and health is tainted by the assumption that living in a larger body means, in all cases, all the time, that you cannot be healthy— which is simply not true.

Finally, if we recognize that childhood adversity and other traumatic experiences are a major risk for being in a larger body, why aren’t we getting the word out about the 87% of studies that show “a positive association between traumatic experiences and [food and body image issues] and PTSD (post-traumatic stress disorder)” (Palmisano, et al. 2016). Why aren’t we offering universal screening and treatment for trauma that is effective and affordable for people whose health and well-being are impacted by trauma, which increases the risk for over 40 physical and mental health disorders, including the top 4 causes of death in the US: heart disease, diabetes, cancer, and stroke—all of which are associated with adverse childhood experiences?

Real change starts with the acceptance of what is, the acceptance of the truth. Until scientists and healthcare providers are willing to admit that what they’ve been preaching has done more harm than good, people living in larger bodies will continue to suffer from the one true remaining accepted sources of discrimination.