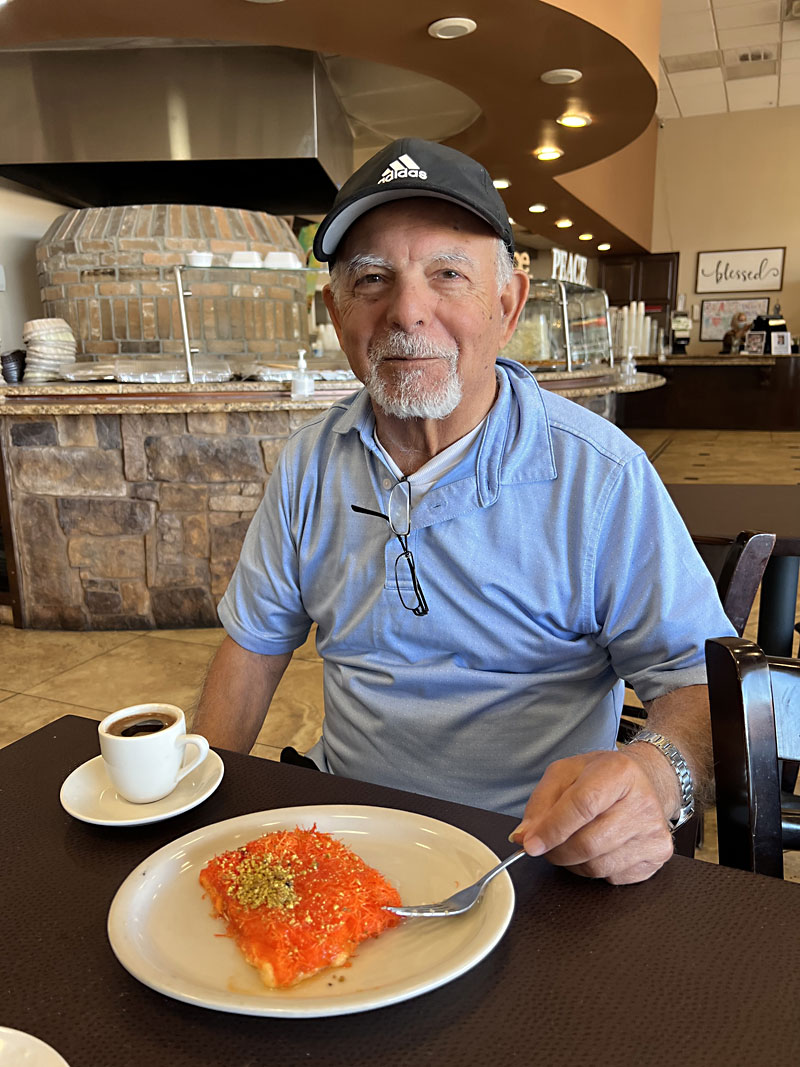 My father was born in Jerusalem in 1938 and came to the United States as a teenager. Now more than 70 years after his arrival in America, he still has a passion for the nostalgic Mediterranean flavors of his childhood.

At 84 years old, he has decided that the time is right for eating dessert first. One of his all-time favorites is knafeh (sometimes written as “kanafa” or “kunafee”), a rich dessert commonly made with shredded filo dough layered with cheeses (or other fillings) and then soaked in a simple syrup. Depending on regional preferences, it can be bright orange, topped with crushed pistachios, and contain a dash of orange blossom water.

With my father staying in our multigenerational home for part of the year, I could not think of a better way to spend one-on-one time connecting with him than enjoying knafeh at four spots around Austin.

My dad loves knafeh so much that one of my favorite childhood memories with him is the time he made the effort to spend an afternoon teaching me to make it in our home kitchen when I was 11. At that time it was very uncommon to find prepared filo dough and it felt like such a rare treat. In some places outside of the Middle East it can still be difficult to find. Even today in the international Facebook group Mama’s Palestinian Kitchen, members in many locations post asking what they can use as a substitute for the dough when it is not available in their area.

In Austin, however, there are plenty of places to find shredded filo dough and at least four places to find freshly prepared knafeh. With my father staying in our multigenerational home for part of the year, I could not think of a better way to spend one-on-one time connecting with him than enjoying knafeh at each of the spots in Austin. Food has a special way of bringing out the storyteller in my father, and I am here for it.

Our first stop on this tour of knafeh was a place I had been wanting to try since it opened in early March of this year, Baklava House (10205 N. Lamar #135, baklava-house.com). The only Arabic sweets shop in Austin, Baklava House is a nod to traditional Middle Eastern shops that offer a variety of sweets, some I had never tried even during the extended time I spent living in my father’s homeland. Located in a North Lamar strip mall, Baklava House brims with multiple types of baklava, sesame cookies, and a melt-in-your-mouth semolina butter cookie called ghoraibah sold both by the pound and in prepackaged gift trays. As soon as we walked through the doors of Baklava House, owner Mohammed Tabbaa made us feel welcome. We were not in the shop five minutes before he handed us samples. The hospitality was undeniable, which is essential to my father before he tastes anything.

There are two primary types of knafeh: smooth (naa’meh) and coarse (khishneh). The knafeh at Baklava House is made to order; during our visit we tried the smooth variety. Tabbaa says that they make less common varieties of knafeh including Nutella, cream, and ice cream fillings. Tabbaa opened his cafe and bakery because Austin did not have a Middle Eastern sweets shop. About knafeh he said, “I had to have knafeh on the menu because it is one of the most famous and delicious sweets in the world.” 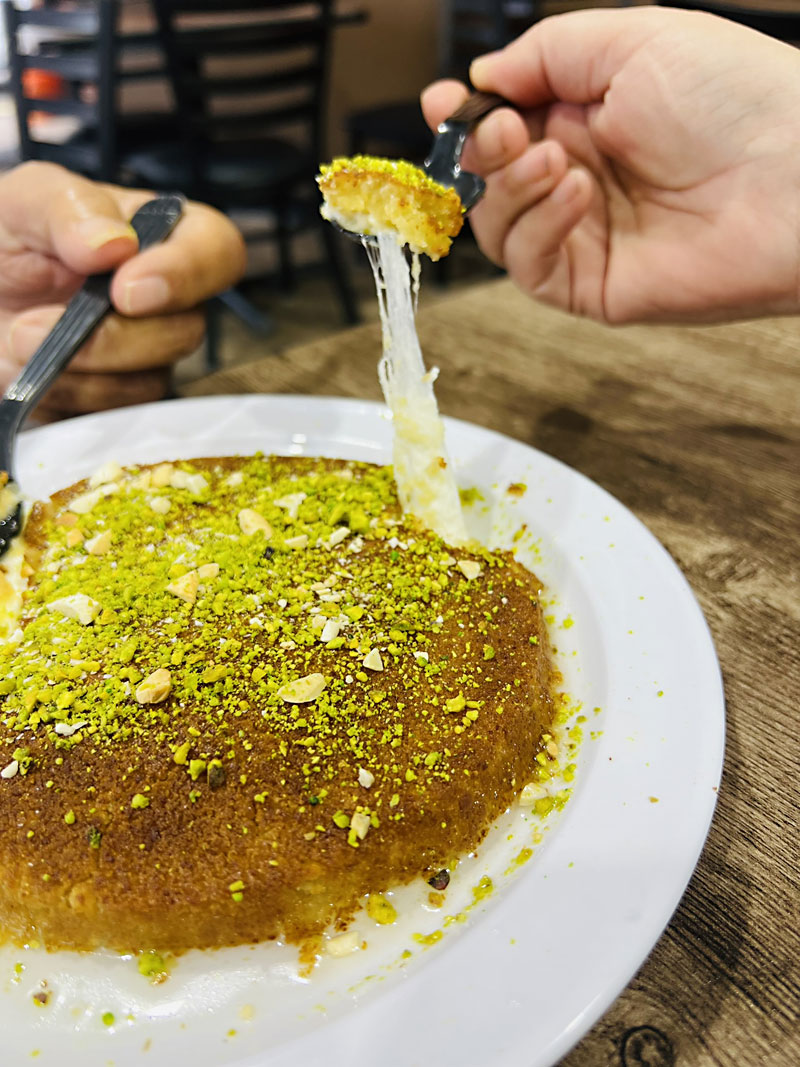 My dad’s take: “Baklava House has the kind of atmosphere where the beautiful variety of desserts and hospitality make the knafeh taste its best. The knafeh had a good pull to the melted cheese when the fork lifted it. The taste was familiar and traditional and the amount of pistachios was generous.”

After a couple of days of rest following our visit to Baklava House, we headed to one of my favorite spots for Middle Eastern food: Almarah Mediterranean Cuisine (12129 RR 620 N. #450, almarahgrill.com). This restaurant is cherished among Austin’s Arab community. It offers sit-down dining and its menu offers three different types of knafeh: traditional orange-colored coarse knafeh topped with crushed pistachios, cream-filled coarse knafeh, and a smooth type called Nabulsiya in reference to the city of Nablus, which is renowned for this dessert.

We ordered all three varieties, along with Turkish coffee to go with them. I drink my Turkish coffee unsweetened when I am having dessert, but my dad is a strong believer that sweet coffee goes best with sweet desserts. His smile when he saw three plates of knafeh before him was priceless. It took the tasting seriously and one by one gave each serving its own time.

My dad’s take: “The cream-filled knafeh was just the right amount of sweet. The texture of the coarse shredded filo dough had the right amount of crunch. Overall, this was a winning knafeh. The traditional and Nabulsiya knafeh had the stretchy cheese that is the telltale sign of good knafeh, but had a little more syrup than some may prefer. Would definitely have all three again.”

Next we visited a Palestinian restaurant and bakery called Peace Bakery & Deli (11220 N. Lamar, peacebakerydeliaustin.com), which makes fresh pita, sweets, salad, dips, lots of vegetarian offerings, and shawarma daily. This place, run by owner Nuha Hammad and her family, is the type that can feel like home not only for the flavors but also for the customer service. They are always ready to help me decide what to taste on any given day. On a recent visit, when choosing from among many delicious baked goods, the proprietor’s son advised me that his mother had just baked a fresh tray of a semolina-and-almond cake called basbousa and I should not pass it up. Those are exactly the kind of tips that make the difference in my experience.

Peace Bakery makes two kinds of knafeh: cheese-filled and custard-filled. On the day of our visit, this restaurant had a large tray of traditional knafeh ready-made alongside their daily offerings of food and baked goods. mrs. Hammad says about her knafeh, “It is actually my own recipe that I created when I first opened the restaurant. Over the past 9 years I have been able to perfect it.” She warmed our slices of knafeh for us, and we included Turkish coffee with our order to complete our knafeh tasting. This knafeh was most reminiscent of the knafeh my father has had throughout his life. It was the familiar comfort food he loves. The filo was orange, the cheese was well balanced, and the syrup was sweet.

My dad’s take: “Good, solid knafeh. Generous portion and well paired with Turkish coffee.” The filo was not as crisp as he prefers but he would come back to Peace Bakery any day of the week for the knafeh and the many other options they offer.

Our last stop on this tour of Austin’s knafeh was a restaurant on Oltorf called Mezze Cafe (504 W. Oltorf, mezzecafeaustin.com). We did things a little differently this time and picked up both traditional coarse knafeh and a chocolate-filled version to go. They did not have any syrup with them, which seemed like it was going to be a red flag, but it was actually a hit with my father. He liked the less sweet version. It had a nice crunch to the filo, as he prefers. As a person who doesn’t love chocolate, he was not particularly fond of the nontraditional version of knafeh. It did not go to waste, however, as my children with palates less attuned to traditional knafeh enjoyed it thoroughly.

My dad’s take: “The crunch on the Mezze Cafe knafeh was the winner of all the knafeh we tried. It wasn’t soaked in syrup, but still a great dessert.” Chocolate is not for knafeh in my dad’s book, but he was glad his grandchildren were enthusiastic about it.

At the end of our knafeh tour of Austin, all samples were Arab-dad approved. Even greater than the knafeh itself was the time we got to spend together eating delicious treats, talking about the memories those nice experiences brought up for both of us, and creating new knafeh-centered memories. For our next food adventure, my dad has requested his second-favorite dessert: apple pie.